What Is RAID 10 and What Are Its Benefits?

From 0 to 9, numerous RAID levels give distinct benefits depending on how the disks are linked or how the settings are established.

This essay will focus on RAID 10, among the most often used RAID levels. We will discuss RAID 10 and its key benefits and drawbacks in detail in this article.

In essence, RAID 10 is a mixture of RAID 0 and 1. Remember that RAID 0 uses striping to distribute data across many disks to improve efficiency, while RAID 1 uses disc mirroring to duplicate data.

This is what RAID 10 does: it combines both of these capabilities. It can also read and write data more quickly than RAID 5 since RAID 10 does not need parity management.

Keep in mind that many individuals mistakenly assume that utilizing RAID 10 (or any other RAID level) is equivalent to creating a backup. This is because if one drive is contaminated, the data on the other driver is also susceptible to corruption.

For a backup to be real, it must be possible to restore damaged data before it is duplicated and saved in another place.

Having administrators use distinct accounts for various activities, such as backing up data, is another option to explore. 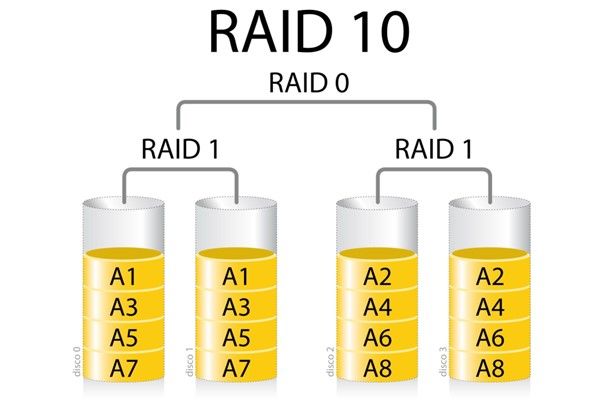 When Should Raid 10 Be Used

Because it does not handle parity and hence does not need any checks, RAID 10 is the optimal solution for situations where applications need to do read/write operations at high speeds. RAID 10's read performance is twice as quick as RAID 5's.

In conclusion, RAID 10 is a hybrid system that combines RAID 0 and RAID 1 to provide exceptional fault tolerance and performance.