What is NAND Flash Memory? Definition and FAQs

NAND flash memory is a common aspect of storage devices nowadays. So, what exactly is it?

NAND Flash makes your storage runs faster. It's a type of storage technology that doesn't consume any power to retain or requisite data. That's why it's one of the key tools available on every storage nowadays, particularly SSDs and pen drives. 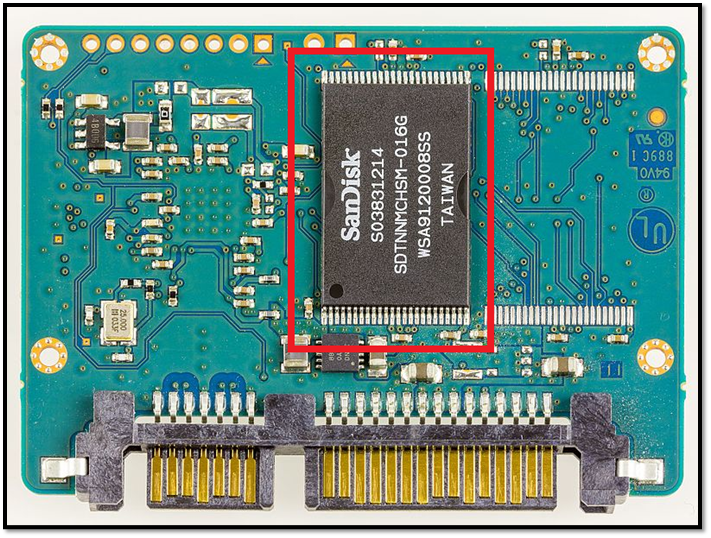 So, what exactly is NAND flash memory? How does it work, and what purpose does it serve in a storage device? And, are there any types of it? So, let's answer all our questions by understanding what NAND technology is and how it helps with viable storage in modern technology.

What Is NAND Type Flash Memory?

NAND flash memory is a non-volatile storage type that doesn't require additional power sources to contain data. One of the main features of NAND Flash is its size, which is comparatively smaller than other storage types like Hard Disk Drives.

NAND Flash devices/memory also don't take any power to store or pass around data. This makes NAND devices much quicker and nimble in shifting or moving data. So, where exactly is its use? In various devices, such as:

Since NAND flash also employs AI heavily, anything with the latest storage technology is bound to feature it in some capacity. Since most storage devices today feature it, the generations might change, but the use of NAND remains constant.

How Does NAND Flash Memory Work?

NAND Flash has a limited ability to read and write cycles in each block. In other words, every time you use it to write data, it eases and rewrites the new data in a continuous erase/write cycle.

However, the primary blocks of NAND flash work in mechanical shock resistance and high durability. In other words, they are able to fend off high pressure and operating temperatures compared to SSDs without NAND or basic hard disk drives.

The two main types of NAND are 2D NAND and 3D NAND. Both these types have a few differences, such as:

The difference shows that the latest version works much faster, draws much less power, and works more efficiently. On top of that, it has much more capacity and performance headspace.

What Is The Difference Between NAND And NOR Flash Memory?

The key differences between the two architectures are their bit line and source line support. For example, the NAND Flash follows this architecture:

It all works from top to bottom, while Bit Line connects them. As for NOR Flash memory, the architecture goes like this:

For instance, here's a diagram to help you grasp this idea better: 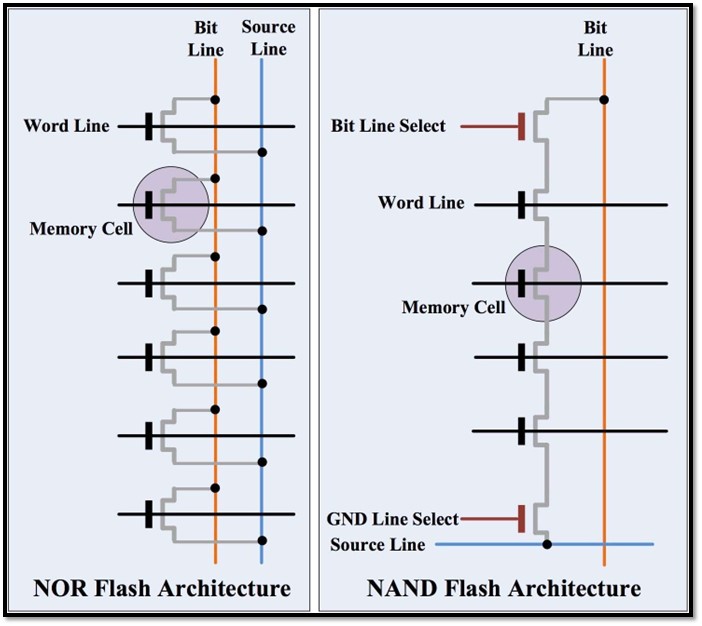 As you can see, the Bit Line & Source Line work simultaneously in flash architecture. However, another key difference between the two architectures is the power consumption. For instance, NOR Flash memories require much more power than NAND during the initial stages.

While NAND Flash is known to have a little less stable current than NOR Flash. Rapid power is supported by both devices (for higher performance), but the active power is determined by the time each type remains active.

So, while NOR Flash has a certain advantage in random reads, NAND Flash is much more power-adequate in terms of reading, writing, and sequential read operations. Hence, the cooler operations at higher speeds are achieved by NAND Flash devices.

What Is The Best Type Of NAND Flash?

There are a few types of NAND Flash, and each one is used in various devices, such as SATA SSDs, NVMEs, and Flash Drives. So, which one of them stands out as the most well-rounded performance?

As you can see, SLC NAND isn't only the fastest, it's also the most efficient. On top of that, it has unmatched durability because of its advanced algorithms and capabilities to handle power stages.

Thus, these factors make SLC the primary NAND flash type in today's devices. And, if you're looking for one with NAND Flash, then always go with the latest one with SLC. But, here are a few aspects you can consider according to your primary operation:

This makes selection a lot easier. However, it's important to know that any NVME devices after Gen 2 are based on 3D NAND, the fastest NAND flash available today. But, currently, Gen 4 SSDs are the fastest and most expensive.

Hope this article was helpful regarding NAND flash memory and the most frequently related queries to it. We explored the few types of NAND flash and how they're all so different, despite being similarly categorized.