20 Useful Keyboard Shortcuts That Every Mac User Should Know

You want to keep your fast-typing flow when typing something important. For some of the other tasks, you would need to use either mouse or trackpad, which does affect it. Even if you are not typing or doing any focused work, then for some functions, you would need to navigate long. In either of the scenarios, Mac keyboard shortcuts are a rescue and do wonders. Amidst plenty of shortcuts, we are here to guide you if you are looking for the top 20 useful keyboard shortcuts on Mac. 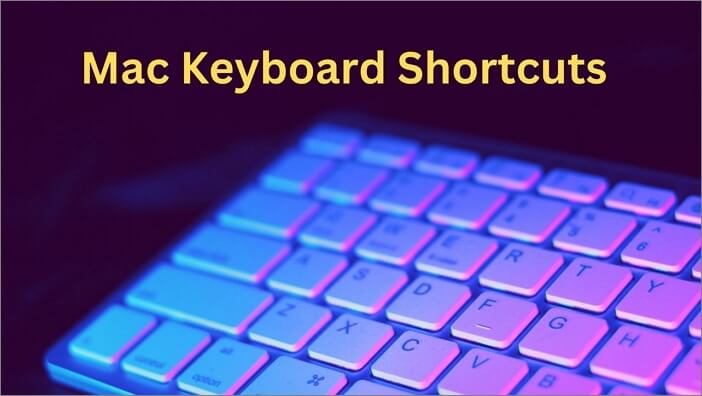 It would help if you used the red button to close a window on your Mac. To close several windows, you would either close every window or use several clicks. Rather than all these, you can press the Command+W keys on Mac, which will close the current window. Besides, if you want to close all the windows, you should use a combination of Option, Command, and W keys.

Opening the finder, selecting an item, and pressing the space key to preview an item using QuickLook is a hassle. Instead of following the long-form method, you choose an item and press the Command+Y keys simultaneously to use QuickLook.

There is a keyboard shortcut when you have opened an application, software, or a window that you want to pin to the Dock by minimizing it. Press the Command and M keys on your keyboard to do what it is for you. Further, if you want to minimize all the Windows running to Dock, use the Option+Command+M keys.

You would often find situations where you would need to cut, copy or edit a webpage URL. For that, the primary task is to select the URL. Instead of navigating to the address bar, dragging the cursor from left to right or versa, press the Command and L keys simultaneously.

When you select a text, you might find it challenging to right-click it, so for cutting the text and copying it to the clipboard, you would try it several times. In such a scenario, you can press the Command+X keys simultaneously. It will cut the selected part and copy it on your clipboard.

When using word processing software, you often move the insertion point at the beginning or end of the line or document. Command and arrow keys will help you out with it.

Amongst different arrow keys, here's how those will help you!

You can use these arrow keys while you are navigating any document.

While you are in a hurry and want to access an application instantly, you will also have keyboard shortcuts. Press the Command+Shift+A keys, and it will launch the applications folder. You can select and open the app you want to use from it.

There are several activities during which you would multitask, and you have several tabs open in your Safari. So, if you want to view all the tabs open on Safari, press the Command+Shift+\ (backslash) keys on your keyboard.

Amidst plenty of workloads, chances are that you would close a webpage without saving. Here, Command+Shift+T keys work wonders. It opens the previously visited website, which you still need to save.

You often feel Dock needs to be improved in full-screen navigation for focused activities. The good part is that you can hide Dock using the Command, Option, and D keys. Besides, you can use these keys again to see the Dock. The effect of these keys in hide or show will be viable till you use these keys again.

For quick searches, think of invoking Spotlight. You can also use keyboard shortcuts to speed up the process and save more effort and time. So, the next time you want to use Spotlight, do not head toward it. Instead, press the Command+Space keys for the same.

You can seamlessly switch between apps on a Mac using the Command+Tab keys. Further, press the Cmd key along with the shortcut if you wish to move the cursor. It will Shift the cursor from left to right between the apps.

The Command+, (comma) shortcut is one of the most underrated but valuable. Head over to an app and use the Command and (comma) keys to check the system preferences of the app you have opened. So, next time you don’t have to check the menu to access its preferences. It's time-saving and effortless and makes things simpler for you.

When you use Chrome and want to move to the website's bottom, there is a keyboard shortcut. Instead of using your trackpad or mouse to scroll down or using the arrow keys, use the Command+Arrow Down button. Similarly, if you want to scroll up towards the website top, press the Command+Arrow Up keys simultaneously.

Waiting for your Mac key to lock automatically takes a lot of time if you are going away only for a while. You can then use the Menu and put it to sleep. But how about a keyboard shortcut that immediately does the task for you? Well, that seems quite a helpful hack. So the next time you are a bit away, use the Command+Control+Q keys, which will instantly lock your device.

When you want to become more expressive in your writing, you use emojis or symbols for that purpose. Instead of navigating and launching the character viewer, press the Control+Command+Space keys simultaneously. Doing so, the character viewer will pop up immediately.

When you want to increase or decrease the volume in small fragments, press the option+shift+volume keys.

You can also adjust the brightness of your Mac using a keyboard shortcut. All you need to do is press the Option+Shift+Brightness (F2) key.

It's a standard keyboard press that allows you to navigate between different elements of a browser or application.

If you were looking for the most useful keyboard shortcuts on Mac, you would have gotten your answer. These save you time and effort and are pretty tech-savvy if your work is complex. Command+W, Command+G, Command+Tab, and Option+Command+Esc are some of our favorite shortcuts because of their usefulness. Which shortcuts do you use the most? Which one did you find helpful? Do let us know in the comment section!