What Is C-Band?
The Use and Benefits of C-Band
The Difference Between C-Band and L-Band
Basic Information about C-band and 5G
How to Get C-Band 5G?

Broad, dedicated channels, ideally 50MHz or more comprehensive, are required for 5G to provide a user experience that is considerably superior to 4G. The frequency that could save 5G is C-band, which is where it comes in.

After months of conflict with the airlines and FAA, AT&T and Verizon activated their C-band 5G networks. Knock on wood, so far, there are no significant flight interruptions or threats to aviation safety.

After two years of "nationwide 5G" networks from AT&T and Verizon feeling a lot like 4G, C-band could eventually significantly increase speeds. What are the C-band and 5G？ What about a C-band phone? Do you need to be afraid of C-bands? Let's discuss it here!

What Is C-Band Used for and Its Benefits?

Therefore, to receive C-band frequencies, a C-band LNB is required. The most petite Prime focus dish that is obtainable commercially measures 1.8 meters.

Here's the comparison between C-Band and other bands:

What Is the Difference Between C-Band and L-Band?

Basic Information about C-band and 5G

The C-band is located in the middle of the 2.4GHz and 5GHz Wi-Fi channels. It is incredibly close to and slightly above the 2.6GHz band that Clearwire, Sprint, and later T-Mobile utilized for 4G beginning in 2007 and is presently being used by T-Mobile for mid-band 5G.

2. What does that mean for the future of 5G?

When you ask the typical individual what they know about 5G technology, the first thing that comes to mind is probably anything related to cell phone technology. And if you take into account how 5G was deployed so far in 2019, you might not be too far off. 5G is a faster successor technology to 4G LTE.

However, the 5G scenario in the next two to three years will be very different from what 5G offers now, how it's deployed, and what it currently looks like. To use a cliché, 5G NR (New Radio) technology is positioned as "disruptive".

However, this next generation of wireless network technology will also enable a wide range of sectors and uses, and it's likely to inspire brand-new use cases.

3. In recent years, 5G is always mentioned by people. What does 5G exactly mean?

The fifth-generation (5G) technological standard for broadband cellular networks, which cellular phone providers started rolling out globally in 2019, is the anticipated replacement for the 4G networks that connect most modern cell phones.

Under this circumstance, you may want to know how to quickly transfer large files over the network.

4. Relationship between C-Band and 5G, or C-Band, 5G and C-Band spectrum.

Our mobile devices can receive internet data from 5G using a variety of radio bands. The millimeter-wave spectrum (24–47 GHz), the much-hyped 5G technology that can transmit gigabit speeds over close lines of sight, lies lower on the radio dial than C-band. C-band, on the other hand, has a greater frequency than low-band 5G (600 MHz–1 GHz), which is capable of speeds and ranges comparable to those of 4G.

C-band, which occupies the middle of the electromagnetic spectrum, falls between mm-wave and low-band, combining quicker speeds with greater range.

5. Why is the C-Band so important?

To get permission to use a portion of this highly sought-after radio spectrum in their 5G networks, AT&T, Verizon, T-Mobile, and a few other US telecom corporations have jointly spent more than $95 billion. The federal government has approved the deployment of the C-band, starting in many American cities in January 2022.

Mobile internet connectivity is offered by wireless providers using electromagnetic spectrum radio waves. The electromagnetic spectrum used for 5G networks also includes the C-band, which, by federal requirements, refers to the frequency range of 3.7–3.98 GHz. This is near the bottom of the C-band spectrum, which has been predominantly utilized since the 1970s for satellite TV broadcasts and distribution.

When we transfer data to mobile devices, 5G uses a variety of radio frequencies. Compared to the millimeter-wave spectrum (24–47 GHz), the much-hyped kind of 5G that can deliver gigabit speeds across close, line-of-sight distances, C-band is lower on the radio dial. Conversely, C-band has a greater frequency than the low-band 5G (600 MHz–1 GHz), which is comparable to 4G in terms of speed and range.

Due to its mid-spectrum location, C-band strikes the ideal balance between mm-wave and low-band, combining higher speeds with greater range. 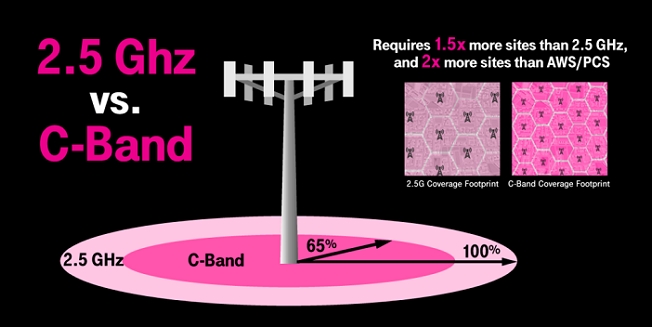 The two primary cell carriers now deploying C-band 5G are Verizon and AT&T. Therefore, you're OK to go if you have a cell phone plan with either. Of course, to access any C-band networks, you'll also need a 5G phone with that functionality.

Currently, 46 major cities have C-band 5G service, covering 60% of the US population. Although Verizon and AT&T still need to expand their cell sites to guarantee C-band coverage in all of these locations, it will be much more widespread starting in 2022.

Beginning in December 2023, 53 significant additional markets will have access to the second chunk of the C-band spectrum. That includes a considerable portion of T-C-band Mobile's spectrum, which has been devoted to developing lower-band, significantly slower versions of 5G.

The locations where C-band 5G will be accessible as of January 2022 are listed by Allnet Insights & Analytics. The areas where C-band will be made available starting in December 2023 are also listed.

1. Do you know what C-Band 5G exactly refers to now?

Mobile networks will use the newly accessible C-Band frequencies to transmit their 5G signal. You'll benefit from stronger signal reception and quicker download times. C-Band is already in use in many nations. The C-Band trend has caught on in Europe, Japan, and other Asian countries.

Any 5G service, including C-band, requires a 5G phone to be accessed. But unless you have Verizon or AT&T and want to make the most of your 5G experience, you don't need C-band on the phone right now. Even if C-band deployment isn't complete yet, availability will increase in 2022, and the most acceptable 5G phone will guarantee you receive the fastest speeds with the greatest coverage.

This article's primary focus is to get the reader to know what C-Band is; C-Band and 5G. The 4GHz to 8GHz frequency range designated for satellite transmissions is called the "C-band" region of the electromagnetic spectrum.

Don't worry about spending much money on a costly phone only for the C-band if you use T-Mobile. T-Mobile won't roll out C-band until late 2023, by which time there will likely be many more 5G phones available, and most (if not all) of them will be C-band capable.

It's essential to look at your home internet options while comparing 5G phones and networks. Find out what's available in your location and how it stacks up against 5G capabilities.