iPhone restarted and lost photos after iOS 11/12 update. You are not alone! Users mostly of iPhone X/8/7/6 reported that they restarted iPhone and pictures are gone suddenly without a prior warning, but are photos really missing? Read this article and you can get four answers to how to recover disappeared pictures from iPhone after restart.

"iPhone updated to iOS 12 successfully and it restarted to put the new iOS functions into effect. Take a selfie, I think, and it's always the first thing to do after getting a new iOS version. But when I return to the Camera Roll to check the photos I took, I found that all my old photos were gone. That's terrible! I didn't delete them for 100% sure. It's only to see that iPhone restarted and lost photos after iOS 12 update! How to recover?"

About "restarted iPhone and pictures are gone"

"Restart" is explained as an act of starting something again. This behavior happens every day when you use a computer and a phone! Restarting seems to be a universal method to restore a device from a sudden death, crash or freezing, but at the same time, it causes data loss trouble all the time.

In the previous post, we discussed the issue of restarted my computer and everything is gone, and many people expressed their thankfulness to us for saving their lost data on their computers. In the same way, the "restarted iPhone and pictures are gone" problem stricks iPhone users a lot, leaving them in chaos wondering why pictures disappeared suddenly from iPhone after a restart. Most of all, they need a 100% effective solution to iPhone photo recovery because these images really meant everything to them. They cannot afford to lose!

Before we proceed with the unique solutions on this page, we think that you may be interested in figuring out why photos were just gone and missing from its place. And there are the most typical reasons for your reference.

Certainly, it's far from counting all the reasons that remove your photos on your iOS device, but the workarounds to find missing files are nothing different. Always remember to restart your iPhone one more time in the first place when the problem arose. Failed? Let's move on to the other four fixes!

This "Recently Deleted Album" acts like an intermediate storage where deleted photos were kept temporarily, for about 30 days before they got permanently deleted.

Launch the Photos app and go to Album. Are lost photos were found in the Recently Deleted Album? If no, you got options in the next part.

An inappropriate restarting would cause the iOS system malfunctioning, guiding you to a wrong ID account. If it's the iCloud photos that disappeared unknowingly after a restart, go to Settings and you can see your name and email address. Change the wrong account with your own one.

Your photos are only visible in your own iCloud account even it's on the same device!

Tap on Settings, tap your name or Apple ID and then tap iCloud and go to Photos and toggle on the iCloud Photo Library bar and the My Photo Stream under it.

Once the iCloud Photo Library has been enabled, turn on your Wi-Fi and wait for few seconds for all the photos to appear. It usually takes a couple of minutes for all the media files to show.

Other than photos, when you unfortunately restarted your iPhone and other items such as text messages and contacts missing, this method also works. It's simply for lost photos recovery from its backup.

EaseUS MobiSaver, a 100% safe and efficient iOS data recovery software, has made life much easier even when you suffer from a vanishing memory of valuable photos. Unless you've never allowed the auto iCloud or iTunes backup on your iOS device, everyone shall love using this software to recover iPhone data.

Let's go through the detailed guide for how to recover photos from iPhone after a restart.

Step 1. Download the proper version of EaseUS MobiSaver. Once done, launch the software. Make sure that your iPhone has been correctly recognized by the software.

Step 2. Among the three recovery options, choose "Recover from iTunes " or "Recover from iCloud" depending on your own backup location and click "Scan". You need to enter your Apple ID and password. 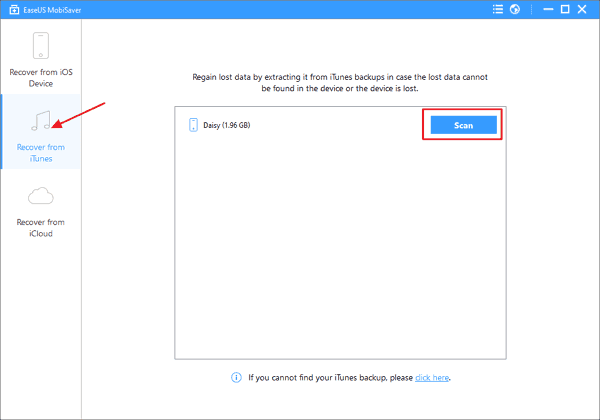 Step 3. After the scan is complete, all the files that were found by EaseUS MobiSaver will be displayed on the left side in well-organized categories. You can find the lost photos quickly under the Photos/Videos tab.

The software also allows you to preview selected photos one by one. Just hit the "Recover" button to export the recoverable image files and specify a folder to save them on your computer. 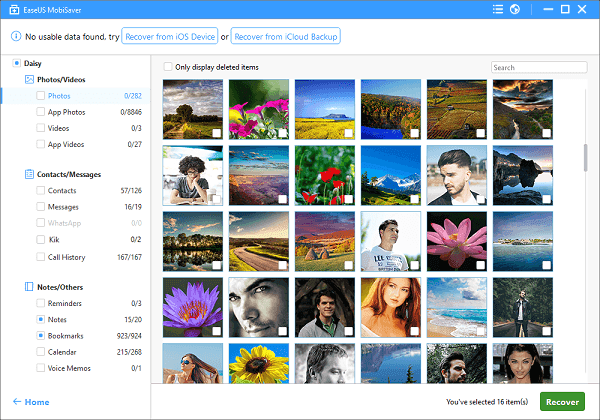