A system image is a copy of the computer system's current state stored as a file or other forms. By using an image, the system can be restored to the exact same state it was in when the image was created. System images can be kept as backups for the system.

If your computer experienced issues such as data corruption or disk error, you can perform a system restore using the image backup. This will completely restore everything on the computer to its previous state.

There are various methods you can use to create system images as backups such as using third-party backup and recovery software. On Windows 10, you can also use its built-in features to create and keep copies of your system by following the steps below.

In this part, we will introduce the built-in Backup and Restore feature on Windows 10. With this feature, you can easily create image backups of your system and store them on a secure storage device. Creating a system image will take up a large amount of space on your device, you should ensure that the external device has enough storage capacity. Apart from HDDs and SSDs, you can also store backup images on other devices such as DVDs. Another system on the network can also be used to store backups.

The main backup method for Windows 10 is to use File History, which creates backups for selected folders on the system. However, creating and restoring from system images is still supported. The steps below will be using the Backup and Restore tool which was also used on Windows 7. If you have an image backup created with Windows 7, you can also restore it this way.

Windows 10 File History vs Backup: Which One Works for Me?

File History doesn't create a complete backup of your computer system, but rather it focuses on keeping your files safely backed up

Step 2. Under the "Looking for an older backup?" section, select "Go to Backup and Restore (Windows 7)" to enter Control Panel.

Step 3. Connect the external device you want to store the image backup to your computer.

Step 4. Click "Create a system image" and follow the on-screen instructions. Ensure that there is enough storage space on your external device. 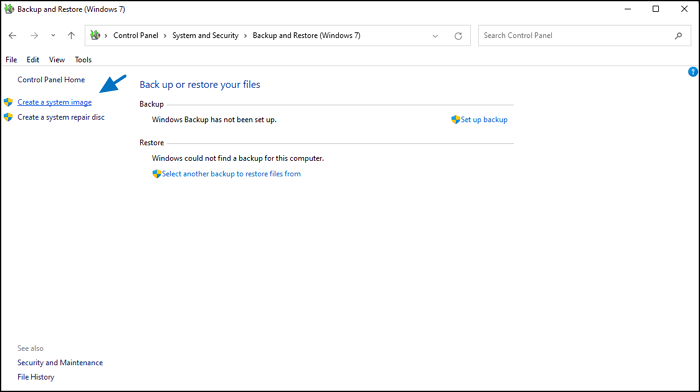 Step 5. Select the drives you want to backup. 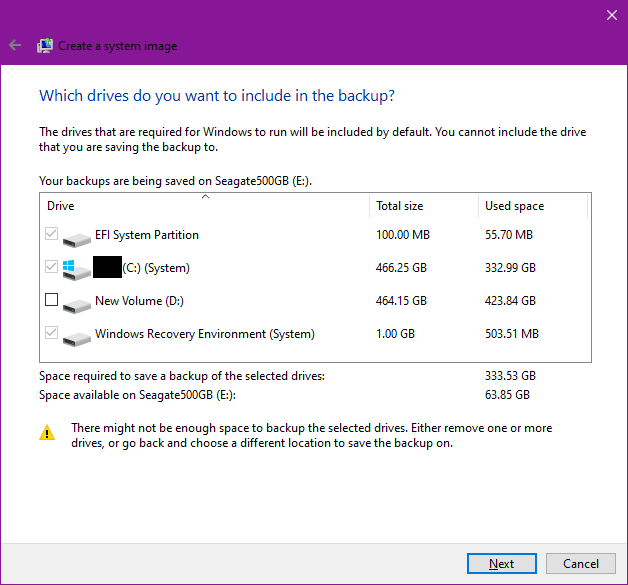 Step 6. Confirm the selection and click "Start backup" to create system images of your drives. 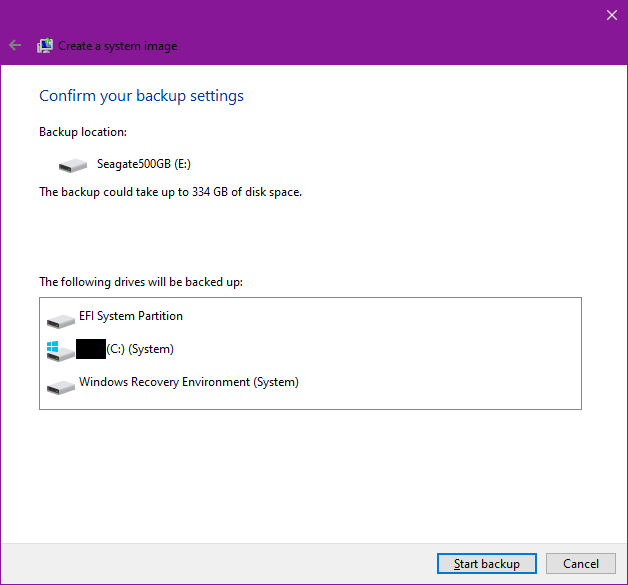 Once the backup process is complete, safely disconnect the external device and keep it protected from damage.

Using the image backup we have created, you can restore Windows to its previous state in case of data loss, disk corruption, virus infection, or other situations. As those situations can cause whole drives to be missing from the system, it's crucial that the backup files are not kept on the same device as the original files. In this case, a securely kept external device will be able to provide backup files reliably no matter the issue.

Step 1. Same as the steps above, go to Backup and Restore (Windows 7).

Step 2. Connect the external device with image backup to the computer.

Step 3. Click Select another backup to restore files from.

Note that newly created files or changes made to existing files may be lost during the restore process, backup any important data as necessary.

An Easier Way to Create System Image on Windows

Apart from using Windows' built-in Backup and Restore tool, many users prefer to use third-party software for data backup and other operations. Generally, you will find that high-quality third-party tools are easier to use and are more convenient when compared to built-in features. With EaseUS Todo Backup, you can create image backups automatically. The powerful software also has many other functions such as OS backup and restore, smart backup feature, email backup, etc.

For users of EaseUS products including EaseUS Todo Backup, we also provide you with 24/7 technical support ready to resolve any issues you might have when backing up your data. With this reliable tool, we assure you that you will be able to create and manage your backups easily and efficiently. By scheduling an automatic backup, EaseUS Todo Backup will regularly create backups while also deleting older ones if set. The backup and restore process can also be done with a few clicks, as the simple interface is designed for all types of computer users.

A system image is a copy of the computer system's state at a point. By using the image as backup, you will be able to safely restore Windows to its previous state. There are many reasons why you may need to perform a system restore: data loss, disk corruption, virus infection, and other issues. You can use Window's built-in Backup and Restore feature or a third-party tool such as EaseUS Todo Backup to create image backups as needed.