A Windows system restore point is useful when somethings wrong corrupts the operating system and damages the data. You can revert the Windows back to an old yet functional system state without reinstalling Windows and losing data. This article provides you with a step-by-step guide to create a system restore point, namely create a system backup for Windows 10/8/7. In total, there are two ways available for you to create a system backup image. One is a third-party Windows backup and recovery tool - EaseUS Todo Backup and the other is the inbuilt Windows System Restore feature.

Before proceeding with either of the system backup options, you need to figure out several questions in connection with creating a system restore point.

Q1: What does creating a restore point do?

By creating a restore point, you can save the state of the operating system and your own data so that if future changes cause a problem, you can restore the system and your data to the way it was before the changes were made.

No. System Restore comes disabled by default, which means that you must enable it before Windows 10 can create restore points automatically. If you use third-party programs, the situation is the same. You must first create a full system image backup in order to enable the automatic backup the next time and in the future.

Q3. Should I create a restore point?

What Is A System Image?

Where to Start to Create A System Image?

Since no tools will create a system restore by default for you, you need to set up the first full backup of a perfectly running operating system state by yourself. In the first place, you have to select a proper backup way that enables you to create a backup and allows you to easily restore the system after a disaster coming. Each Windows backup tool creates a unique backup image with a particular file extension. That is to say, you cannot use one system restore point across two different backup utilities.

On top of that, to minimize the file size of the growing system restore points, it's of great importance to be able to create differential or incremental backups that the previous/outdated system backups will be replaced by the fresh ones.

Last but not the least, you must take the recovery procedure and the recovery speed into consideration. At the same time, ensure that the chance of system recovery is 100% working, which won't be interrupted or stopped during the course.

Regarding those aspects we mentioned above, we suggest every user of Windows 10/8/7 choose EaseUS Todo Backup over the default Windows System Restore feature. Since EaseUS Windows backup software provides more comprehensive backup solutions to Windows operating system, as well as many other objects like hard drive/partition, files, emails, etc.

 Tip
Despite the Windows System Restore function is limited in creating a system backup image very intelligently, and sometimes you may encounter issues like "System restore failed and did not complete successfully" while trying to restore your compute from a previous system restore point, the default Windows solution is still an option to safeguard your computer. You can add it as a secondary protection method beyond the primary choice of EaseUS Todo Backup.

The advantages of creating a system restore point with EaseUS Todo Backup are as follows:

Step 1. If you want to back up your current Windows Operating System to an external storage device, connect it to your PC.
And note that the device should be as equal to or even bigger than your system drive.

Step 2. Launch and run EaseUS Todo Backup and click "OS". Or, you can also click the menu at the left top corner and select "System Backup" to start.

Step 3. Select the Windows System that you want to back up and specify the destination - local Windows computer hard drive, cloud/network drive or external storage device to save the OS image.

Click "Proceed" to start backing up your Windows OS now. 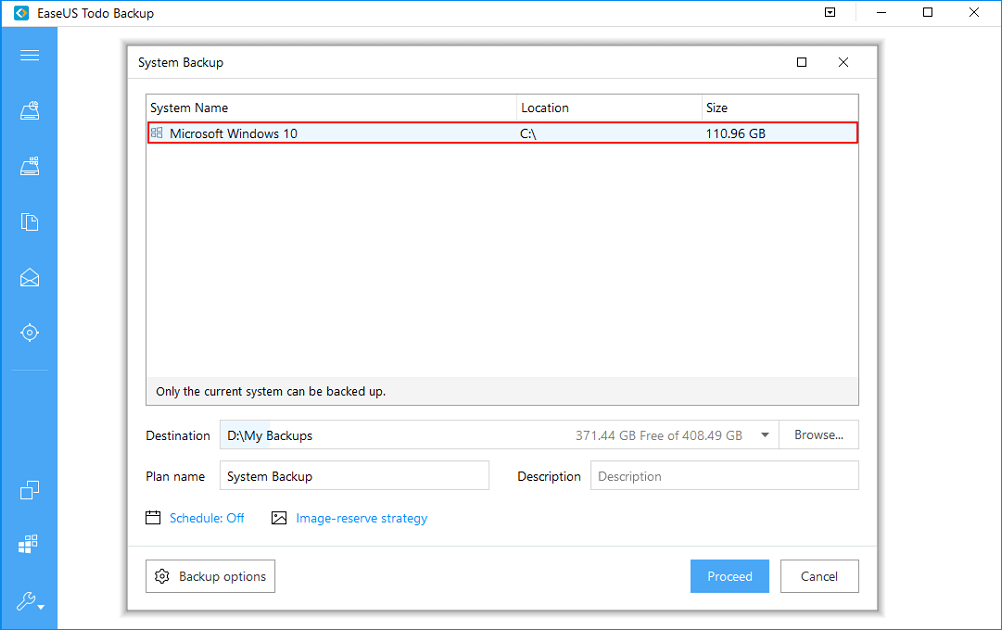 PLUS: If you want to create an automatic backup plan for your Windows system image, please refer to the below tips for a tutorial guide:

1. After selecting System Backup, click "Schedule: Off" option, then set up backing up your OS by daily, weekly, or monthly.

2. Save the changes. And finish the process by following the step.

3. After the first full backup of your Windows OS, EaseUS Todo Backup will automatically to run an OS backing up on itself as your settled schedule.

1. Use a USB drive, CD or DVD to create the WinPE emergency disk. 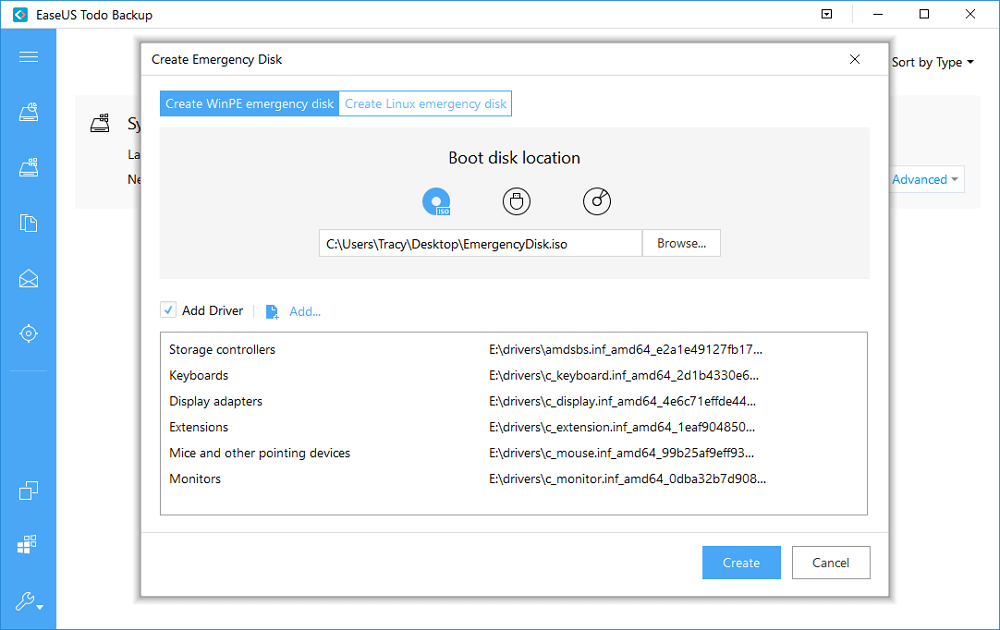 2. Run EaseUS Todo Backup and click "OS" to do a system backup. Select the Windows System that you want to back up and specify the destination. (You'd better choose a cloud/network drive or external storage device to save the OS image).

When the Windows operating system encounters a boot issue, and the computer can't boot up. You can use the emergency disk and system backup files with EaseUS Todo Backup to quickly fix the boot problem and make the computer boot.

1. Insert the EaseUS emergency disk to the new computer and press "F2/F8" to boot into BIOS.

2. Go to the boot menu and set the computer to boot from the EaseUS Todo Backup emergency disk.

3. Find the system backup task on the main window of EaseUS Todo Backup and click  "Recovery" to restore the system. 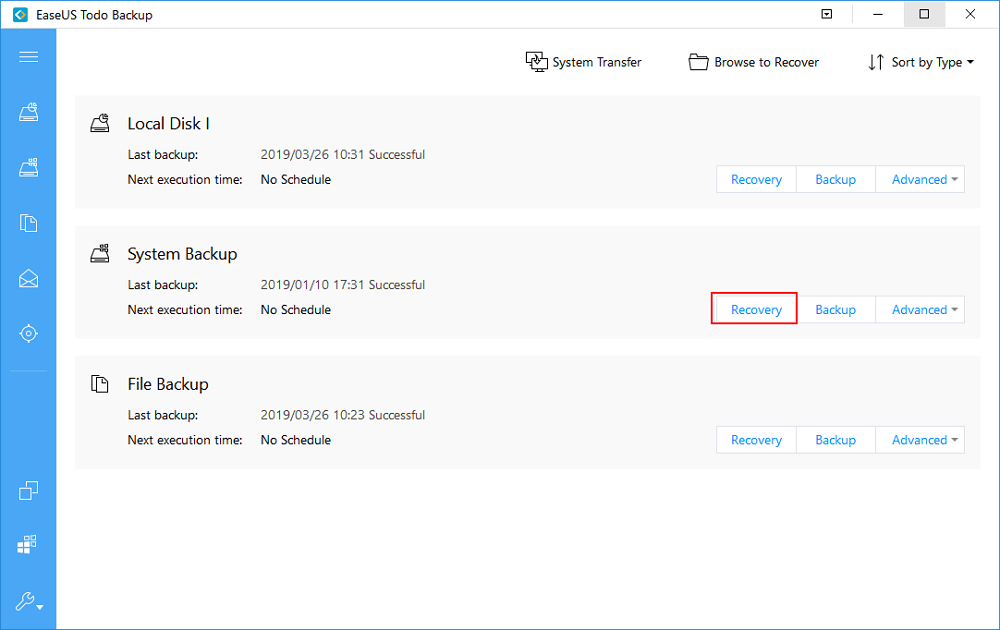 4. Choose a system backup version that you need and click "Next".